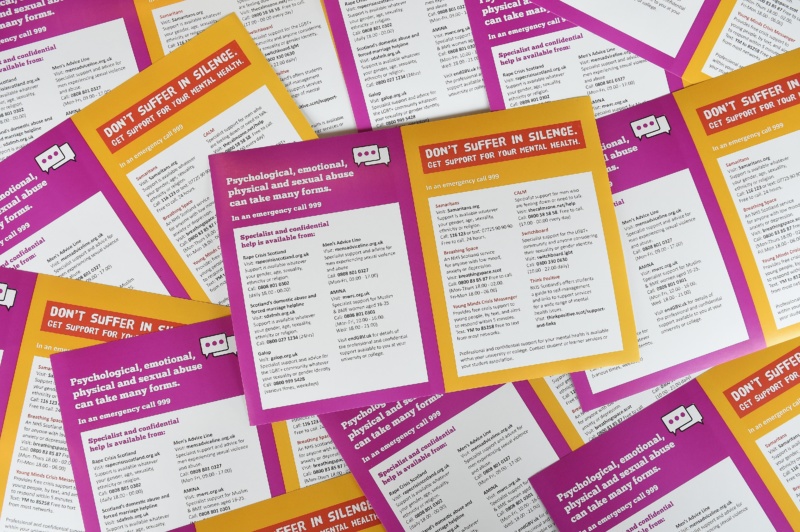 A new resource to help students experiencing gender based violence and mental health issues has been launched at Edinburgh Napier University’s Bainfield student accommodation by the Minister for Further Education, Higher Education and Science alongside the college and university sectors.

Over 50,000 stickers, which detail specialist helpline numbers for people experiencing gender based violence and mental health issues have been distributed to every university and college in Scotland.

The A5-sized stickers are to be displayed in toilet facilities, study zones and student accommodation. It’s hoped that the visibility of the stickers around campuses will raise awareness of gender based violence and mental health issues and will encourage those who need it to seek help.

The stickers are the second phase of an initiative launched in autumn 2018 saw over 100,000 walletsized cards distributed to every university and college across the country. The cards also provided information about specialist support services but were a resource to be carried by staff to help them handle disclosures of gender based violence from students and other members of staff.

Commenting at the launch of the stickers, Professor Andrea Nolan, Convener of Universities Scotland and Principal of Edinburgh Napier University said:

“It’s really important that everyone at university has access to specialist support, should they need it. These stickers are another practical step to help achieve that, helping to raise the visibility of support services to those who need them.”

“Our campuses should be places where students achieve academically and where their wellbeing is supported, and the Scottish Government is committed to working with the sector to deliver the best student experience.

“Gender-based violence is unacceptable and we want staff and students to feel empowered to tackle it with total confidence. That’s why we’ve supported the development, adoption and adaption of the Equally Safe in Higher Education Toolkit, and the development of Staff Support Cards and the Student Stickers, led by Universities Scotland and launched today.

“We are committed to the provision of more than 80 additional counsellors over the next four years in colleges and universities. We have also worked closely with NUS Scotland, supporting their Think Positive project which, together with Student Mental Health agreements, is focused on having the best support available on campuses for students facing mental health issues.

“I hope that all campuses will display these stickers in prominent locations, and that these will encourage those who need to seek help to do so.”

Both the stickers and cards have been developed with input from the Scottish Government, NUS Scotland, College Development Network, Universities Scotland and Ms Fiona Drouet of the #EmilyTest campaign. The idea for the resources came from Ms Drouet, whose daughter Emily tragically took her own life after a campaign of gender based violence whilst a student at university.

“We’re delighted to see the Emilytest vision become a reality today. Emily’s university journey ended in the most traumatic way and we believe it could have been different.

“As students are facing increasing gender based violence and mental health struggles, it is imperative that we highlight that support is available and that it is OK to ask for help. The stickers, along with the support cards and other ongoing projects, serve as a positive step in ensuring students find professional help.”

The stickers include confidential and national support services available to anyone experiencing gender based violence and mental health issues of any kind. However, the stickers also provide specific support for female students, male students, LGBT+ and BAME students.

“NUS Scotland is determined to work alongside all our partners towards the eradication of genderbased violence and for increased support for mental health services throughout colleges and
universities.”

“We are proud to have supported the creation of these new resources, which are a significant help to survivors of gender-based violence and students requiring support for their mental health.

“We will strive to secure even more support for students, ensuring consistency across Scotland, addressing the needs and diversity of our members.”

“CDN Is delighted to contribute to the launch of the gender based violence and mental health stickers, which are intended to be used in student residences and communal areas.

“This initiative makes an important step towards fostering a strong culture in colleges that is clear in its condemnation of gender based violence and gives staff and students the confidence to report unacceptable behaviour and where there is zero tolerance of such behaviour”.