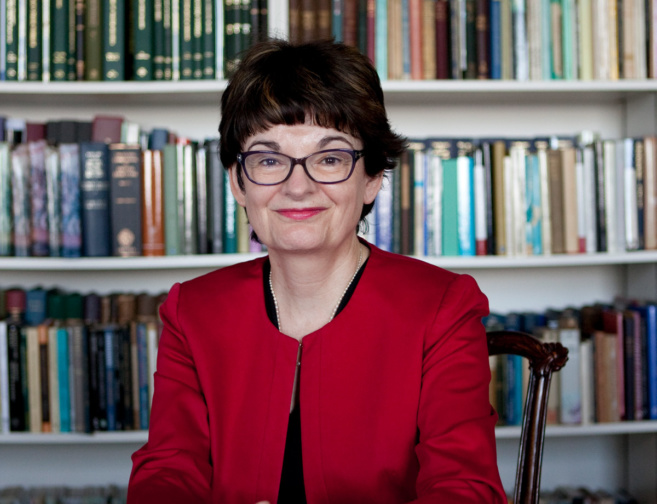 Professor Sally Mapstone FRSE is the Principal and Vice-Chancellor at the University of St Andrews. She is also the Vice Convener of Universities Scotland and chairs our Admissions Policy Group.

Since its establishment in 1413 as Scotland’s first university, the University of St Andrews has been a place for debate, discussion, and discovery.

In the centuries since, Scotland’s universities have grown in number, reached out to welcome those from different backgrounds, and become institutions on such a scale that they would be unrecognisable to scholars of the 15th century. Yet, at their core, our fundamental principles remain the same. Universities are crucibles of ideas, places where people come together to debate and challenge concepts. It is that dynamic dialogue, grounded in the challenges of the present and looking to the future, which can lead to astonishing insight and discovery.

The world-leading thinking and discovery which takes place in Scottish universities each and every day was highlighted earlier this month when the results of the Research Excellence Framework (the UK-wide assessment of university research) were published. 85% of Scotland’s research was judged to be in the two highest categories of performance, rated as world-leading or internationally excellent.

And yet this week Scottish Government research funding has been cut for a range of Scottish universities, all of them producing research of the very highest quality.

I believe that should be a cause of wide concern. It perversely undermines one of our nation’s key assets.

The research that our universities do positively shapes Scotland’s economy and society. It ranges from research undertaken at Glasgow Caledonian University on the potentially deadly human papillomavirus (HPV) which led to an immediate Scottish Government HPV vaccination programme for boys, to work at the University of Glasgow that has transformed public understanding of the impact of slavery and its legacy in British society, with materials created for all 367 Scottish secondary schools.

Such accessible research is helping decision makers to navigate complex challenges, it is shaping the future and the lives of those who call Scotland home, and it is helping to secure Scotland’s place on the global stage. Take the University of Stirling’s research underpinning the anti-smoking legislation, or the University of Dundee’s work on brensocatib, a drug that treats lung inflammation in COVID-19 patients.

University research is a vital asset that can help create opportunities for Scotland, transforming the nature of the country in which we live, and can make a vast difference to the social, cultural and economic circumstances of generations to come.

Professor Sally Mapstone has said competitive funding for university research will be vital.

Research propels changes in social policy and it fuels innovation. The economic impact of research-driven innovation can be seen across Scotland in our regional clusters with industry which have formed between universities, the public sector and business. Scotland has clusters in fin-tech, life-sciences, informatics, computer games and creative industries.

This approach to economic growth and job creation is celebrated by the Scottish Government in its National Strategy for Economic Transformation from earlier this year. Clusters form around connections of talent, expertise and investment, and successful clusters are almost always underpinned by strong research and development.

Yet this place for universities at the heart of a virtuous cycle of debate, discovery and research for social, cultural and economic good is under threat. The world-leading research undertaken in Scotland will not remain so indefinitely if it is not competitively funded. Investing in research is an investment in Scotland’s economic growth and prosperity. According to analysis by London Economics, every £1m of public investment in Scottish university research generates £8m of economic growth.

The UK Government is increasing its investment in research in institutions in England, with a commitment to spending 2.4% of GDP on research and development by 2027.

Meanwhile in Scotland eight universities are facing immediate cuts in Scottish Government research funding, with four major research-intensive universities facing cuts of £1m or more in 2022/23, and further planned cuts the year after.

Next week the Scottish Government is expected to set out its long-term spending plans for the next few years. We hope these plans will reconsider and recognise that investments in our national assets, such as research, deliver long-term and far-reaching returns, building the kind of future we want.

Scotland’s future will be shaped by whether we support our universities as crucibles of debate and discovery.