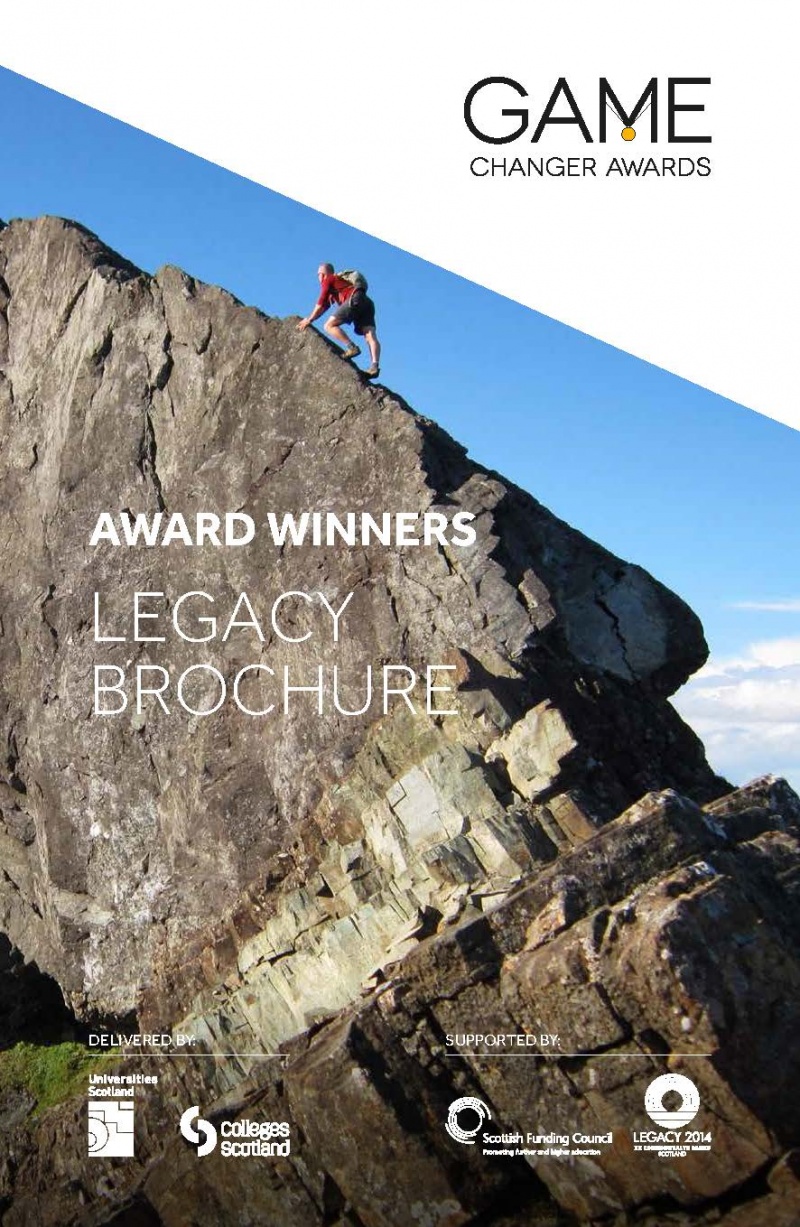 Just over a year ago the Game Changer Awards recognised 30 projects in Scotland’s colleges and universities that exemplified the legacy ambitions of the Glasgow 2014 Games. Returning to those projects more than 12 months later, the legacy lives on and the organisers of the Game Changer Awards are delighted to publish an Awards Winners Legacy Brochure today (Thursday, 17 September). The Legacy Brochure presents a round-up of some of the legacy stories emerging from the winning projects and shows many of the projects continue to grow in scale and ambition, benefiting greater numbers of people.

Scotland’s colleges and universities couldn’t wait to get behind the Glasgow 2014 legacy of ambitious transformation because they understand transformative change.

In the months before, during and after the Games, projects have taken place in colleges and universities across Scotland that were inspired by Glasgow 2014. The Game Changer Awards shone a light on these activities and recognised the best of them. Over 100 different projects from colleges and universities were judged on how closely they embodied the Glasgow 2014 legacy themes of connected, flourishing, sustainable and active. Thirty different projects took home gold, silver or bronze medals.

The Game Changer Awards helped Glasgow 2014 reach further into colleges and universities across Scotland: 90 per cent of the students and staff involved said it made them feel more involved in Scotland’s greatest sporting event.

One year on from the Games, with legacy very much still in people’s minds, it is clear how the Game Changer projects have made a difference and how they continue to do so.

In some cases the legacy is a greater connectedness within communities. For example, Stirling and Bridge of Allan now have a university and community multi-sport club for disabled users. This has grown from the success of the Disability Tennis Programme, launched by students at Stirling University who wanted to open up tennis to the local community. In Ayrshire college lecturers and students have teamed up with the NHS to receive training and will now roll out a three-month weight management programme which will befit staff, students and the wider community.

In other cases, the legacy impact is felt by individuals who have flourished because of their involvement such as Joanna Warwick, who now has a career as a sports coach at Aberdeen Sports Village, having volunteered in the Aberdeen Sports Tour as a University of Aberdeen student, and Alexis Moss who is now a stylist with Toni & Guy following her experience of working in the Athletes’ Village salon at the Games.

Beyond the Game Changer Awards, Scotland’s colleges and universities made another important contribution to the success of Glasgow 2014. Twenty-five of the gold, silver or bronze medals won by Team Scotland were won by 21 students and graduates of Scottish colleges and universities. Colleges and universities have an important role to play in supported elite athlete – and their success at the XX Commonwealth Games reveals how well the approach is working across further and higher education. Universities and colleges offer coaching, top-class facilities, sports scholarships and the support and flexibility needed to ensure neither students’ sport nor studies are compromised.