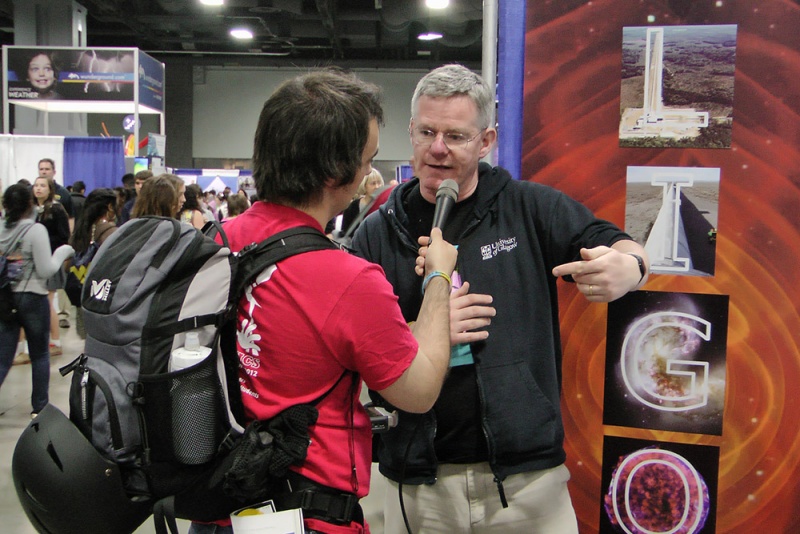 [vc_row][vc_column][vc_column_text]Professor Martin Hendry is Professor of Gravitational Astrophysics and Cosmology at the University of Glasgow, and Chair of the Institute of Physics Scotland. He is part of Glasgow University team at heart of an international effort proving Albert Einstein’s theory of gravitational waves.

On September 14th 2015, just before 10am Greenwich Mean Time, the Earth moved. More precisely, for a small fraction of a second on that Monday autumn morning the Earth was and stretched and squashed by a gravitational wave – a ‘ripple’ in the fabric of space and time, predicted a hundred years ago by Albert Einstein in his general theory of relativity, and produced by the collision and merger of two massive black holes that occurred a long time ago in a galaxy far, far away. This cataclysmic event converted in the blink of an eye a mass three times that of the Sun directly into gravitational wave energy – for that fleeting moment radiating more power than the combined light of every star in the entire observable Universe.

These astonishing numbers are all the more remarkable because on Thursday February 11th at a press conference in Washington DC an international team of scientists reported, as the world watched agog, that they had detected this gravitational wave. The discovery was made by two giant measuring devices in different parts of the US called LIGO (Laser Interferometer Gravitational-Wave Observatory) – and marked the culmination of decades of research: a global scientific quest likened by LIGO’s Executive Director Dave Reitze to the Apollo Programme in its scope, ambition and audacity. At the heart of the LIGO project, and key to this amazing discovery, is cutting-edge technology and innovation developed here in Scotland, led by scientists in the Institute for Gravitational Research at the University of Glasgow.[/vc_column_text][vc_empty_space][vc_column_text]

“At the heart of the LIGO project, and key to this amazing discovery, is cutting-edge technology and innovation developed here in Scotland, led by scientists in the Institute for Gravitational Research at the University of Glasgow.”

The LIGO detectors consist of two 4km “arms” set at right angles to each other, each containing a laser beam which is reflected back and forth by mirrors at either end. LIGO’s lasers act like a giant, ultra-precise stopwatch: the stretching and squashing of space by a passing gravitational wave causes the arms to lengthen and shrink, one getting longer while the other gets shorter and then vice versa. As the arms change lengths, the laser beams take a different time to travel through them – making the beams fall out of “step” and forming what we call an interference pattern (hence the name interferometer). It was this pattern – translated into a measurement of the minute changes in the length of each LIGO’s arms – that revealed the passing gravitational wave and analysis of the pattern’s structure showed it to be the signature of two colliding black holes, violently shaking space and time exactly as Einstein had predicted.

But why did it take a century to confirm Einstein’s theory? Well, catching a gravitational wave is really, really hard! Firstly the changes in the length of LIGO’s arms were incredibly tiny – roughly one million millionth the width of a human hair – because, like ripples on a pond, gravitational waves get weaker as they spread out through the cosmos. And as if detecting this tiny effect were not difficult enough, all manner of local disturbances on Earth make it even harder – from the ground shaking to power-grid fluctuations and instrumental “noises” that mimic or indeed completely swamp a real signal from the cosmos.[/vc_column_text][/vc_column][/vc_row][vc_row][vc_column][vc_empty_space][/vc_column][/vc_row][vc_row][vc_column][vc_single_image image=”78401″ img_size=”large” alignment=”center”][vc_empty_space][/vc_column][/vc_row][vc_row][vc_column][vc_column_text]To achieve the astounding sensitivity required to finally detect a passing gravitational wave, almost every aspect of the LIGO detectors’ design has been upgraded over the past few years. Scientists at the University of Glasgow led a consortium of UK institutions that played a key role – developing, constructing and installing the sensitive mirror suspensions at the heart of the LIGO detectors that were crucial to this first detection. The technology was based on our work on the earlier UK/German GEO600 detector, and turned LIGO into Advanced LIGO, arguably the most sensitive scientific instrument ever, to give us our first direct glimpse of the gravitational Universe.

Our discovery of gravitational waves, and the research that made it possible, spans the globe – the result of an international collaboration featuring thousands of scientists in hundreds of laboratories and institutions based in dozens of countries. It is also a triumph for Big Science: for the vision and commitment of the National Science Foundation, and the UK’s Science and Technology Facilities Council (among several other national agencies) to invest long-term in a project so challenging that many were sure it would never succeed, and for the perseverance of the hundreds of scientists involved who have devoted their entire careers to a quest that many had regarded as an academic dead end.

For an individual academic the day to day experience of belonging to a collaboration like LIGO can be strange and disorienting at first. To begin with there’s the problem of managing your diary, and balancing teaching and administrative commitments across the regular working week when so much of your research time involves teleconferences stretching well into the night. Then there’s adjusting to the deluge of emails that awaits you each morning, from colleagues across the world who keep the balls rolling while Glasgow sleeps. And with the Research Excellence Framework and impact agendas ever more important for Scottish Universities, there’s the need to strike a balance between the short-term quest for 4* papers, and the collaboration’s decades-long timelines for research and development.

“Our discovery of gravitational waves, and the research that made it possible, spans the globe – the result of an international collaboration featuring thousands of scientists in hundreds of laboratories and institutions based in dozens of countries.”

[/vc_column_text][vc_empty_space][/vc_column][/vc_row][vc_row][vc_column][vc_column_text]It doesn’t take long for the Big Science experience to grow on you, however. Sharing the excitement of discovery with a global scientific “family” – all of whom are passionate, idealistic and supremely dedicated – is endlessly rejuvenating. The past five months since “detection day” last September 14th have surely been the most intense of my scientific career, and yet throughout these months I have constantly marvelled at the energy and commitment of the LIGO team across the world. No stone was left unturned as the collaboration strove to make our discovery announcement (and the suite of scientific papers that underpin it) as rigorous, comprehensive and clearly communicated as we could possibly make it. That the global impact of our discovery has been so far-reaching has surprised and delighted us all. And perhaps even more exciting is the fact that this is not the end of the story – it’s just the beginning, with many more discoveries ahead as we open an entirely new window on the Universe.