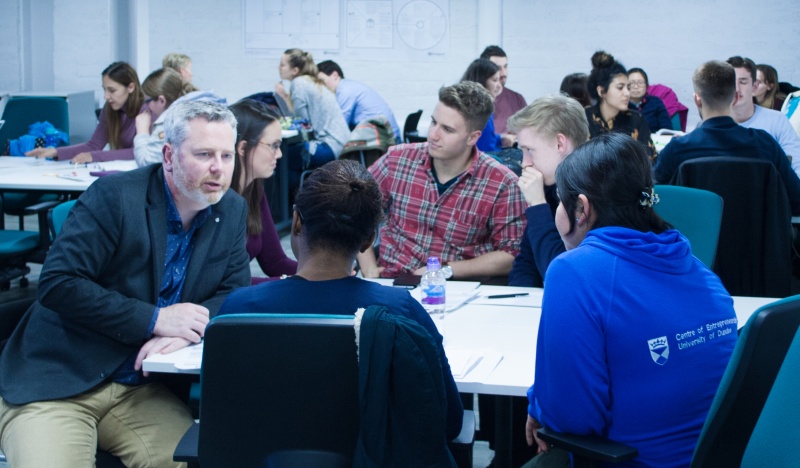 A new report, released today from Universities Scotland, demonstrates the significant contribution students and graduates make to Scotland becoming a ‘Can Do’ entrepreneurial nation.  The report, Made It Happen, highlights an acceleration of entrepreneurial activity amongst students, graduates and universities themselves, over the last three years to 2018, suggesting a strong culture of enterprise has taken hold.

Made It Happen revisits a set of eight actions which Scotland’s 19 higher education institutions committed to in 2015 to build momentum behind the entrepreneurship agenda. The report finds strong evidence to suggest that entrepreneurship is now embedded in the learning experience students receive at university, and finds that infrastructure to support business creation and growth, such as incubators and accelerators, are now found at almost all institutions. These actions have underpinned a rapid rise in the number of companies created by students and graduates, which helps to drive Scotland’s economic activity.

Highlights from the data captured in the report includes:

“Three years ago we set ourselves the challenge to accelerate the growing culture of entrepreneurship in higher education and I’m delighted that all of the indicators suggest we have achieved that. University students, graduates and staff have really channelled the Scotland Can Do mentality, which is generating a wave of highly creative, determined and resilient graduates, has rapidly increased start-up rates and will deliver economic benefits to Scotland.

“It’s clear that our university sector is producing more entrepreneurs than ever. Their drive and ambition are hugely impressive, with their focus on growth and export, and its particularly rewarding to hear them credit their universities for giving them the platforms and support to get started. However, our goal is not that every graduate becomes an entrepreneur, but that every graduate takes a ‘Can Do’ and enterprising mind-set to their workplace, wherever that might be.”

“Our report, due for release soon, will show what universities are doing across the UK and how it has changed over the last six years. One noticeable conclusion is that the universities in Scotland are embracing the need to embed enterprise and entrepreneurship within degree programmes. We want to understand why this is the case and what the next steps are to ensure that the UK remains at the forefront of enterprise and entrepreneurship education in the coming years.”

Made it Happen also revisits 17 graduates and new entrepreneurs featured in 2015 to track their entrepreneurial journey. Many have enjoyed considerable success. Some businesses have been acquired by larger companies, including Facebook, others have grown the business with many already exporting internationally. There is also a strong theme of common good or social enterprise running through many of the entrepreneurs’ stories.

The report can be read at: http://www.universities-scotland.ac.uk/madeithappen