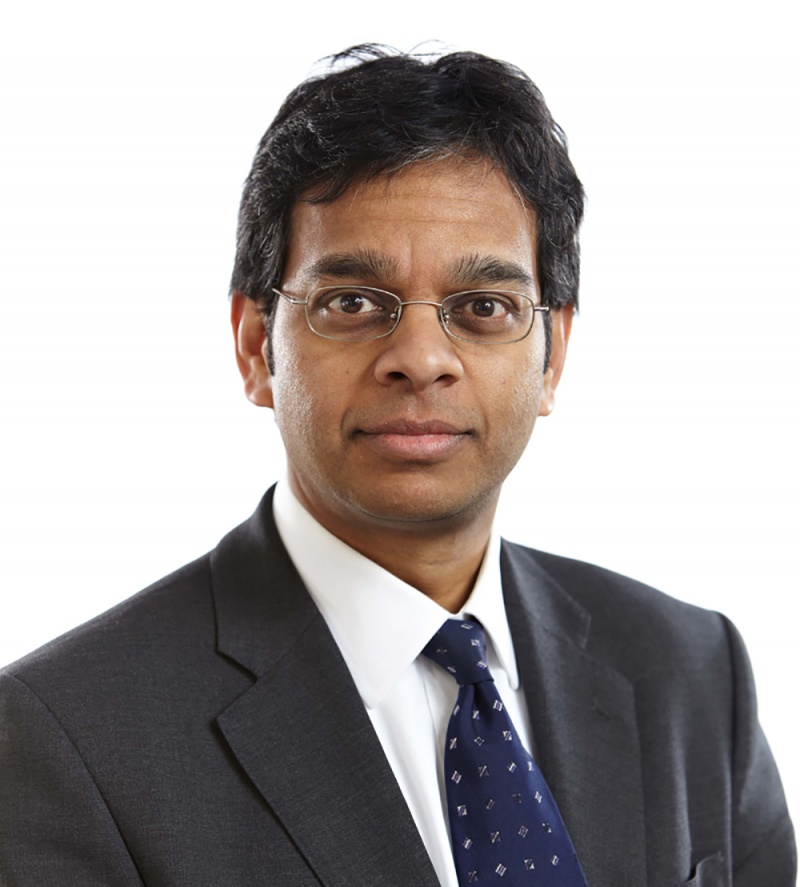 [vc_row][vc_column][vc_column_text]Siddharthan Chandran is the MacDonald Professor of Neurology at the University of Edinburgh and Director of both the Euan MacDonald Centre for Motor Neurone Disease Research and the Anne Rowling Regenerative Neurology Clinic.  Professor Chandran works in the emerging discipline of Regenerative Neurology, combining laboratory and clinical research to understand and work towards new therapies for neurodegenerative diseases.

An act of targeted philanthropy was hugely influential in bringing me to the University of Edinburgh in the first place. Whilst at the University of Cambridge, I was approached by Edinburgh to run a new Centre for Motor Neurone Disease Research called The Euan MacDonald Centre. At the time, this unique Centre had been established at the University by a father and son who gave a major donation of £1 million. This is where the whole journey started for me. Without the insightful and generous investment by Euan and his father Donald, so much of what we have achieved at Edinburgh just would not have happened.

This initial investment not only provided substantial resource to establish a major Research Centre, it created a template and case study for the University to develop models of funding and delivery of interdisciplinary research that it has now used for several other new Centres.

Neurodegenerative diseases are those where the brain’s nerve cells die. They represent one of the major public health threats in the industrialised world with more than 20 million new cases worldwide every year. These diseases include Alzheimer’s and other forms of dementia, multiple sclerosis (MS), Parkinson’s, and motor neurone disease (MND; known as ALS in the USA). All these disorders are progressive, incurable and invariably fatal. There is thus a great and unmet need to improve our understanding of what causes these diseases, to find better ways of caring for people living with these conditions and, crucially, to develop treatments that will protect and ultimately repair the damaged brain.

Although different neurodegenerative diseases show markedly differing symptoms, they may share common underlying mechanisms including defects in the same faulty gene. Therefore, investment in one area of neurological research or one specific disorder, such as MND, may ultimately help people who have other disorders.

Building on the success of the Euan MacDonald Centre, which brought together a range of scientists, clinicians, healthcare practitioners as well as patients, we started to see more and more opportunities to learn from different diseases and to collaborate on an ever-widening set of projects. We were eager to demonstrate the success of our projects to our funders and, importantly, to show how their initial investment had been leveraged several times over, allowing further investment in our expanding programmes.

This patient-centred and interdisciplinary approach — together with our ability to demonstrate that we could raise further funding from other sources — was important in our discussions with the  author J. K. Rowling when she was considering making a substantial investment in the University. Jo’s mother died of MS when she was only 45 — the same age that Jo was when she made a £10m donation to the University to fund a new clinic named after her mother. Jo was excited by the possibility that we could not only learn from other diseases and disorders, but that we wished to focus on direct study of patients both to improve care as well as to accelerate  the discovery of new treatments and drugs.

The Anne Rowling Regenerative Neurology Clinic is now a major “patient-centred” research clinic at the University of Edinburgh Medical School. Its mission is to improve the lives of people living with presently untreatable neurodegenerative diseases such as the various types of dementia, MND and MS. By integrating care and research, the Clinic is uniquely placed to bring patients and scientists closer together to amplify our knowledge of the causes of these disorders and of what might be done to slow, stop and ultimately reverse the damage caused by these devastating conditions.

Patients at the Anne Rowling Clinic are routinely invited to participate in our research programmes and I never fail to be impressed by their courage and their wish to work with us in moving towards more and better methods of dealing with these diseases. One way in which this happens is by a patient donating a sample of their blood or skin, which we then use to generate stem cells. This builds on pioneering research such as that led by Sir Ian Wilmut, whose team created Dolly the Sheep in Edinburgh 20 years ago.

Using these cutting-edge technologies it is now possible to generate personalised master stem cells, called induced pluripotent stem (IPS) cells, from any human. The donor’s own cells can then be studied ‘in a dish’ to see which drugs might be the most promising candidates to take forward into actual trials.

All major pharmaceutical companies have libraries of drugs that have been developed for various diseases and disorders, with very few ever making it into the public domain. And yet buried in the archives may be a nugget that could be effective.

There have also been recent examples of drugs, such as Viagra or aspirin, which have been developed for a particular purpose and found to be effective in a quite different clinical area, offering new roles for ‘old’ drugs. This is called re-purposing, and offers quicker and more cost-effective ways forward than is the case with the traditional drug discovery process. With colleagues at University College London, the Anne Rowling Clinic is leading the very first neurological repurposing trial — a £3m study called MS-SMART, which is testing three promising drugs for MS.

I anticipate many new possibilities to develop and clinically trial new drugs for these devastating brain disorders. None of this would be possible without the vision and support of philanthropists such as Donald and Euan MacDonald and Jo Rowling.

There seems to be a change in the funding landscape, particularly in universities, where private donors are seeking to invest in specific, measurable research projects and where they can really see academics working hard, across boundaries.  In light of our own successes and experiences, I can wholeheartedly encourage private funders to seek out such research programmes in universities across Scotland.[/vc_column_text][vc_empty_space][vc_single_image image=”78824″ img_size=”large” alignment=”center”][vc_empty_space][vc_column_text]Find out more about The Euan MacDonald Centre for Motor Neurone Disease Research and the Anne Rowling Regenerative Neurology Clinic.

You can read more about the  work of the Euan MacDonald Centre for Motor Neurone Disease Research and the Anne Rowling Regenerative Neurology Clinic by following the links below: