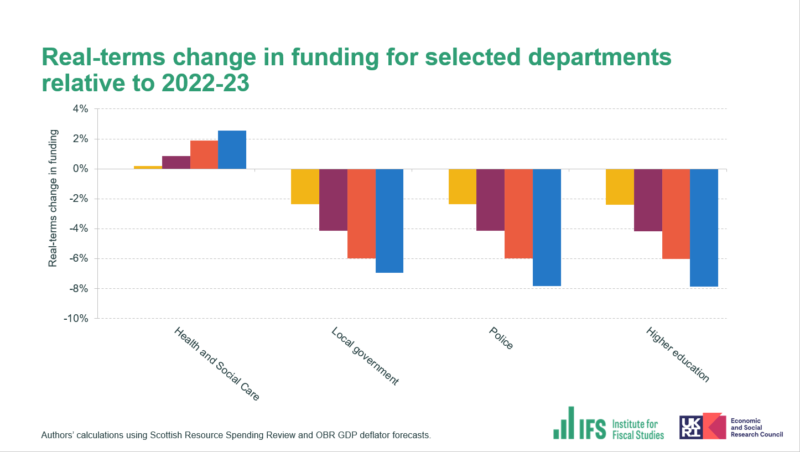 The Scottish Government published its resource spending review today, setting out its high-level spending intentions to 2026/27. It includes an indicative, combined allocation for higher education and further education. The combined budget is set to be flat in cash terms for the next four years at £1,501 million.

Responding to the announcement, which represents a real-terms cut of 8% over the period, based on estimates by the Institute for Fiscal Studies, Alastair Sim, Director of Universities Scotland, said:

“It’s hard to feel anything other than disappointment and deep concern for the medium-term future based on today’s resource spending review allocations. The real terms cuts to higher education make it incredibly difficult to continue to deliver for Scotland, our students, staff and the communities we serve. The outlook is bleak for the next few years. We lack clarity on detailed, multi-year funding for universities that allow them to plan to manage the financial storm.

“Universities are integral to the realisation of the national economic transformation strategy and the Government’s ambitions on skills, innovation and enterprise. They also are key to public sector reform – already doing so much to operate efficiently through procurement and reform of their estates. With such close alignment to the Scottish Government’s agendas and stated priorities in this spending review, it is incredibly disheartening to read that the financial situation facing university students, staff and institutions is forecast to get worse, year on year.”

Our submission to the Scottish Government, Prosperity & Inclusion, set out the need for an increased investment in universities of £62.2 million in resource funding It can be found here.

With thanks to the Institute of Fiscal Studies for the analysis and the chart.