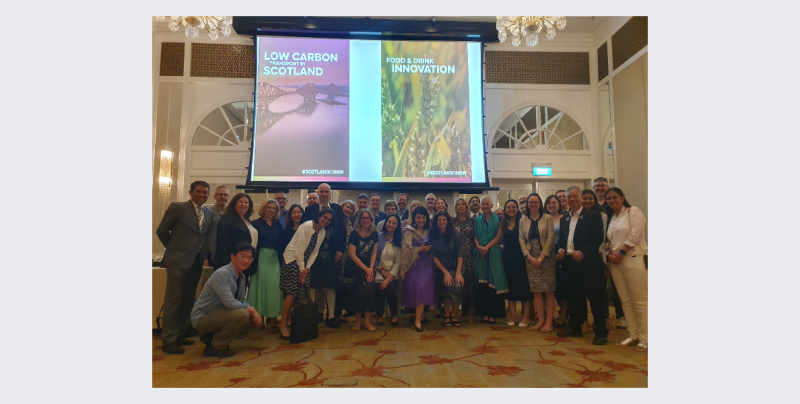 Connected Scotland’s Project Officer, Ela Kossakowska, spent three days in Singapore, with the Connected Scotland partnership, to attend the Going Global Asia Pacific conference and build connections across the region. She shares her reflections from the Conference.

Just over half of Scotland’s universities, along with the British Council Scotland and Scottish Development International (SDI), hosted a St Andrews Day celebration in Singapore on 29 November, attended by over 100 stakeholders to highlight partnership opportunities between Scotland and the Asia Pacific Region.

In recognition of the growing significance of the region, the British Council held the first edition of its flagship Going Global Conference, in Singapore. The Conference brings leaders of international higher education together to further and deepen connections between the UK and partners across the world. The fact that the four-day conference overlapped with St Andrews Day was too good an opportunity to miss to put Scotland in the spotlight. It offered the perfect occasion for the Connected Scotland partnership to host a networking reception, alongside the main event, to build on connections and increase awareness of the capabilities of our universities in the region.

Amongst the guests at the reception were senior university leaders, SDI, SQA and government officials; guests from Bangladesh, China, Hong Kong, India, Indonesia, Japan, Malaysia, Myanmar, Pakistan, Philippines, Singapore, Taiwan, Thailand and Vietnam. As such, the event brought together new partners and some of Scotland’s longstanding relationships, such as India and Pakistan. We also invited several Global Scots, Scottish university alumni and the Directors of UUKi and Universities Wales.

Professor Andrea Nolan, Principal and Vice Chancellor of Edinburgh Napier and Convener of Universities Scotland’s International Committee and Professor Brad MacKay, Vice Principal International, University of St Andrews and Chair of Connected Scotland, represented Scottish institutions and delivered keynote speeches with a focus on the breadth and excellence of our offer, emphasizing Scottish universities’ excellence, openness, international outlook and strong desire to collaborate with partners worldwide for mutual benefit. Partnerships and the exchange of our expertise across borders allows us to better respond to current global challenges. This mirrored some of the discussions at the Going Global Conference, where the UNESCO Sustainable Development Goals were a recurring theme.

During the conference, the British Council also launched a new Alumni UK platform at a reception at the High Commissioner House. Its ambition is to be the biggest alumni platform in the world, the global networking community.

The Going Global conference marks the first opportunity the Connected Scotland partnership has had since the pandemic to attend and host events internationally and demonstrate, in-person, the value of these partnerships to Scotland. It was also my first international event since joining the Connected Scotland team at Universities Scotland earlier this year. I was really taken by the energy, enthusiasm, and positivity in the room, with Scottish partners keen to relay the message that Scotland is open and international and international guests being so interested in what Scotland has to offer. It was great to see, first-hand, Connected Scotland’s role in bringing key partners together as a platform for showcasing the best that Scotland has to offer.  While much of the discussion focused on the potential and strengths of transnational education, in reflection of changes highlighted by the pandemic including universities’ responsibility in the sustainability agenda, it also allowed institutions to emphasise post-graduate work opportunities in Scotland, so much desired by international students.

My biggest take-away from the trip has been how much more we can achieve for Scotland when we work in partnership and really elevate our presence internationally.