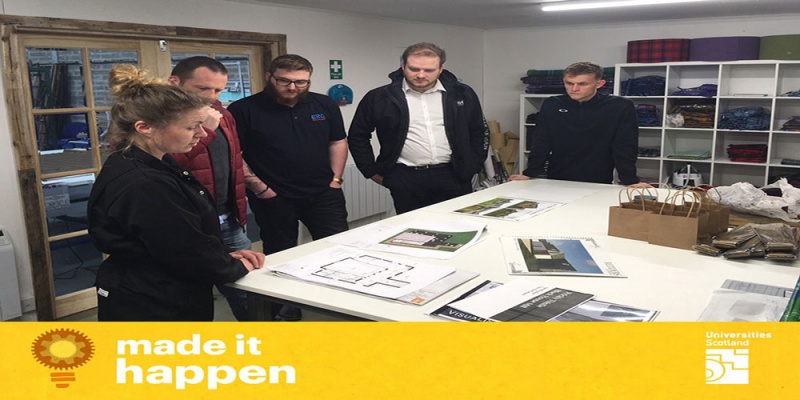 Our fourth blog this week comes from Neil Simco at the University of the Highlands and Islands. Neil explains how a unique institution like UHI has gone about working with local businesses across its region to give students work experience that will ultimately led to greater prosperity for the region in the long-run.

Since 2015, the University of the Highlands and Islands has been continuing to evolve a programme whereby every student will be provided with an opportunity for work-related experience during their degree programme. This has been boosted by the recent recruitment of a team of five staff dedicated to making the university’s Higher Education curriculum as relevant to employers as possible.

Alongside this, we’ve been giving our students exposure to working with local entrepreneurs, the university’s Inverness based CREATE and Perth-based Centre for Enterprise have developed programmes where students can work directly with entrepreneurs who are building their businesses.

One example of this is the university’s relationship with Prickly Thistle Scotland Limited, founded by award-winning female entrepreneur Clare Campbell. Clare approached the university in 2015 for assistance in a number of areas as she started to build her international textiles business from its Highlands base. She initially offered textiles students (studying primarily in Inverness and Shetland) the opportunity of a design competition after which the winning design was produced commercially.

The success of this initial contact led to Clare offering a summer internship to a textiles student which was taken up by one of our degree level students. As a result of this, after graduating she was offered a full time role with Prickly Thistle as a weaver. At the time of the job offer, she had been unable to gain graduate appropriate employment elsewhere and this opportunity enabled her to not only work in a discipline that she had trained for but also to remain in the Highlands of Scotland.

With the relationship with the university now well established, when Clare embarked on a growth programme to convert a 250 year old farm steading into a new weaving mill, she offered the chance to design the conversion to our final year architectural students.  Working with the company, the students’ lecturer devised a competition where the cohort were split into four teams, all of which developed designs for the mill. In the end, reflecting commercial reality, it was mixture of two teams’ drawings that were chosen and from them, final planning permission ready plans were drawn up.

“The support from the university has been second to none” explained Clare Campbell “I’ve been delighted with the response times, the professionalism of the staff involved but most of all, the dedication shown by the students of UHI that I’ve come across in the different subject areas that I’ve worked with.”

From this and other experience like it, the university is currently using the relationship as an example to encourage other entrepreneurs to consider how their local university can help them build their businesses which in turn helps support the economic growth of our region. In the future, especially with the new support team in place, we hope to further streamline this process to allow even more students the opportunity to become involved in such activities.

You can read the rest of the blogs in this series as they are published at: www.universities-scotland.ac.uk/blog