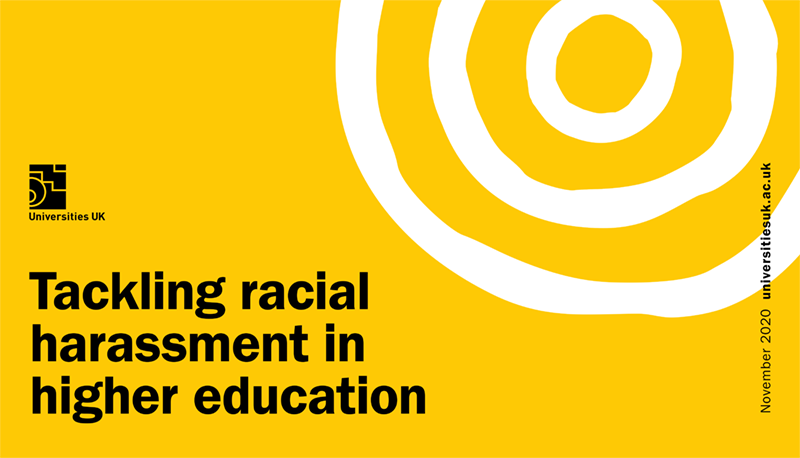 Tackling Racial Harassment in Higher Education is the product of an advisory group convened by UUK in October last year and responds to many of the recommendations in the Equality and Human Rights Commission’s (EHRC) Universities Challenged inquiry into racial harassment.

Among the recommendations are a series of practical steps that all university leaders can implement immediately:

The guidance was informed by experts in the field and carried out in-depth consultation with panels of exclusively Black, Asian and Minority Ethnic students and staff with lived experience of racial harassment. In May, Universities Scotland ran two further virtual focus groups with students of colour who are studying at universities in Scotland to contribute to the research.

Responding to the publication of the guidance, Professor Gerry McCormac, Convener of Universities Scotland, said:

“Universities UK’s new guidance is an important tool in the battle against racism. Racism is abhorrent and has no place at university, nor indeed anywhere. The new guidance for universities is timely, given the spotlight that has been recently trained on racial injustice. In August this year, Scottish Principals made a joint public declaration of anti-racism.

“Last year’s EHRC report made for difficult reading. Universities committed then to accelerate action to eradicate racism in all its forms and assisted the advisory group led by UUK, to conduct research and listen to students with lived experience of racism to create best practice guidance. There’s more to do but I’m heartened by the leadership shown so far as the sector continues its work to eradicate this blight on society.”